Home Events Things To Do Visual Arts One of the Most Dangerous Substances in the World: Opening Reception — Partners and Son 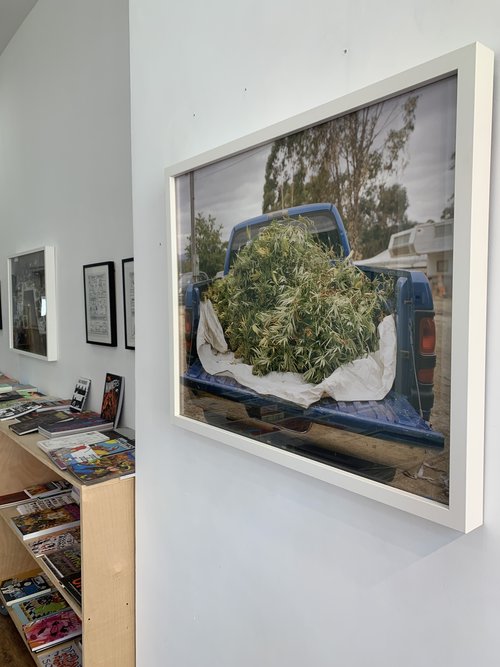 One of the Most Dangerous Substances in the World: Opening Reception — Partners and Son

Partners and Son is pleased to present an exhibition of projects by Brian “Box” Brown and Maureen Drennan which explore the social and legal worlds which have grown up around marijuana, its use, production, and distribution.

In his project, Legalization Nation, Brian “Box” Brown traces the halting process by which a patchwork of state laws is returning marijuana to legal and decriminalized statuses, in concert with an emergent network of corporations that actively seek to monopolize the market by leveraging marijuana’s ambiguous status to limit access to legal production and distribution, in many cases excluding the very participants in the traditional market who were most harmed in the prohibition era.

Maureen Drennan’s Meet Me in the Green Glen captures both the everydayness of farm life and the unusual tenor of farming at a scale outside of the law. Drennan spent nine years photographing a marijuana farmer named Ben and over the course of those years both the stigma surrounding marijuana production and Ben’s health declined. In these photos, as in Brown’s comics, the political and personal aspects of marijuana are made visible.

The exhibition will be on view from Wednesday, April 20th through Sunday, May 22nd, with an opening reception on Friday, April 29th.

Message from Partners and Son: Admission is free, but masks and proof of vaccination are required. Contact [email protected] for more information.

Disclaimer:
This event is not produced by the South Street Headhouse District (SSHD) but is shared on our Website Calendar where events occurring within our district are featured. Please contact the event organizer for questions.