The South Street Headhouse District is proud to announce the Hall of Fame Class of 2017.

Since 1993, SSHD has honored business people and residents by celebrating their longevity and service to the District. After a long hiatus, the Hall of Fame was re-instated last spring and this year we welcome four new honorees. 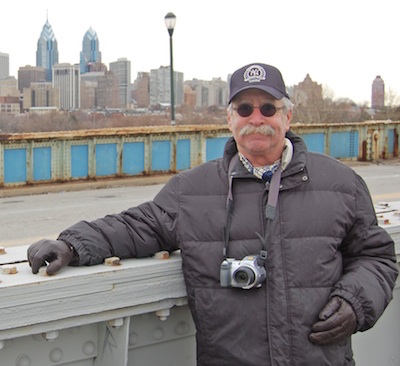 Architect, artist, author, community activist.  Joel was once upon a time just a wandering young architect who was working on a little project, a gallery for a couple named Snyderman (HOF Class of 1995). Upon arriving on South Street in 1969, Joel noticed that artists around the somewhat desolate neighborhood were fixing up buildings, opening stores and making something magical. Stumbling upon an apartment with a price tag of only $25 a month, Spivak decided to stay for a while.  Almost five decades later, he is still here, creating art and telling the story of South Street.  “South Street,” he says, “stood for a place where people could come together to create something wonderful and lasting.”

A passionate advocate for the Jewish community, and an expert on the preservation of local architecture, pushcarts, trolleys and the South Street Renaissance, Joel’s window front at 4th & Bainbridge is always filled with whimsical and educational displays that characterize both his and South Street’s artistic spirit.

A graduate of Philadelphia’s University of the Arts, Joel’s forays on South Street have always been renowned as unique and fun, beginning in the 1980’s when he operated one of the beloved  Rocketships & Accessories.  He also was the co-founder of that merry band of found-object artists known as the Philadelphia Dumpster Divers.  Joel was the inspired originator of Philadelphia’s National Hot Dog Month celebration, as proclaimed by Mayor Michael Nutter and which led to the successful Dog Days events on South Street.

It is a great tribute to know that his spirit rings true on the Street that he once helped reclaim from the rubbish pile to create something that was and is still an evolving work of art. 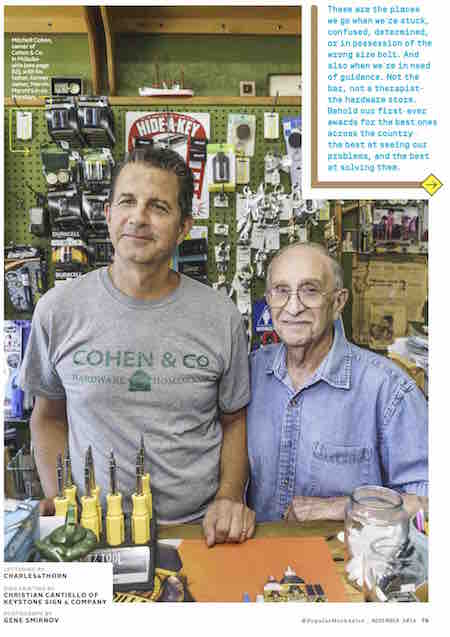 In the long history of South Street, few businesses can claim the longevity of Cohen Hardware.  Cohen & Co. Hardware started as B. Cohen Hardware back in 1913 at 911 South Street, originally owned by Barnett Cohen (Marvin’s grandmother). It moved three times over the decades, until most recently in 1996 when the store moved to its current location on 615 Passyunk.  Marvin and his wife Marilyn took over the business from his father Phil, and though they recently passed the business along to their son, Mitchell, the senior Cohens are still a regular presence in the store.

For over 100 years, the family business has become a community staple not just for hardware and home goods, but as a gathering place for swapping local gossip and ideas, for sage advice, and for welcoming newcomers to the neighborhood.  Ask anyone who has spent even a little time in our community and they will testify that Cohen & Co. has always been an asset to the busy, bustling life in and around South Street.  So we were not surprised last year when Popular Mechanics chose them as one of the ‘Best Hardware Stores in America’.  We are grateful for Marvin and Marilyn, for not only carrying on the tradition started by their grandparents, but for instilling this love of the community in their son and in the process, in all of us that know them. 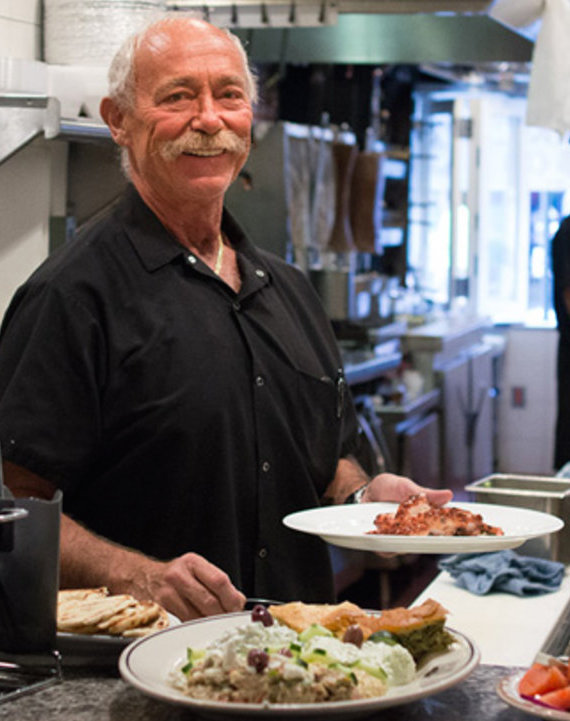 Tom immigrated to America when he was 12 years old from his beloved native Greece and found his way to Philadelphia when he was a just 21 in 1974. Very few folks remember that originally he sold ice cream and hot dogs at his place at 509 South, before he returned to his roots and started serving the finest shish kebabs and gyros and spinach pies South Street had ever seen.

Since 1976 South Street Souvlaki has seen many changes in the street, but it has become a legacy establishment among the ever-changing restaurant landscape. There is a reason why the restaurant has dug into South Street for so long, and much of that popularity has been driven by its owner. Gregarious and funny, generous and at once personal, Tom has been an ambassador for South Street to the thousands that have visited his window. We are proud to have him as part of the South Street family, and as any good Greek will tell you, family is everything.

Though relatively new to Fabric Row proper, Fleishman Fabrics & Supplies has been supplying  wholesale and retail fabrics, tailor trimmings and more to the community since Harry Flieshman founded Fleishman Fabrics in 1924.  In the 1940’s, Harry bought a trimmings store at 5th & Monroe, which carried drycleaning and tailoring supplies and became “Fleishman Supplies”. His wife Sylvia joined him in business and took over the reins. Harry was a savvy businessman who excelled at buying at the right price and successfully ran the business for over fifty years. They knew the value of a dedicated team and keeping customers satisfied, which became hallmarks of their business.  So naturally, Harry and Sylvia’s son Stanley was expected to work in the store every Saturday and learn the trade while he was growing up. In early 1980’s Harry’s health was compromised and Stanley and his wife Tricia moved back to Philadelphia and in time took over.  Stanley and Tricia Flieshman now run the store alongside their son Joshua.

In 2014, the store moved from 5th Street to 4th Street to relocate to the heart of historic Fabric Row.  In an age where fabric stores have had to adapt and evolve to remain in business, the Fleishmans are known to all for their customer service and support of the business around them.

The list of multi-generational businesses is increasingly small and we honor the Fleishman’s for keeping the traditions of Fabric Row going and growing.

This year, we honor a Hall of Famer with the Bud Plumer Community Service Award. Bud Plumer, a longtime resident, businessman, and South Street Hall of Famer was known for his tireless commitment to South Street and the entire city.  We are pleased to announce that the first recipient of this honor is Christina Kallas-Saritsoglou of Philly AIDS Thrift.

In 2005, with co-founders Tom Brennan, Peter Hiler and Kevin Wilson, Christina opened the what would become the landmark store out of their experience in thrifting and focused toward combating HIV/AIDS in Philadelphia. 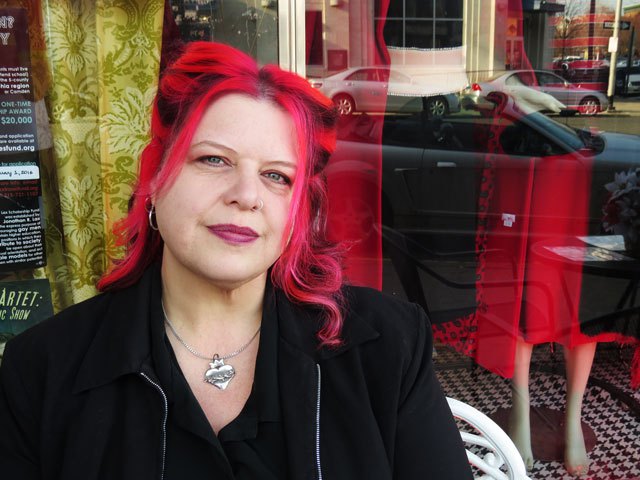 “We’re all long-time AIDS activists,” Christina says of PAT’s formulation, “We’re also all lovers of junk … so it just made sense to us to do this.”

The store was originally located on Bainbridge Street, about a block from its current location, but grew too big for the space and moved to their current location on at the intersection of Passyunk & 5th Streets in June 2011.

PAT regularly donates $20,000 a month to the AIDS Fund, another fundraising organization that is responsible for the annual AIDS Walk and monthly Gay Bingo.  PAT also recently presented two special awards of $5,000 each to Siloam and the William Way LGBT Community Center.  The AIDS Fund distributes PAT’s donations to 29 AIDS agencies in the 5-county Philadelphia region without taking any administrative costs. To date, PAT has donated a total $1,719,000 to the HIV/AIDS cause.  In 2015, Philly AIDS Thrift opened a 300-square-foot Philly AIDS Thrift HIV Testing Center on the second floor of the retail store, the first of its kind in a retail business.

Self­less­ness can prove a hard sell in today’s tempt­ing “me-first” cli­mate, but count Christina Kal­las-Sar­it­so­glou among the ar­dent buy­ers of the be­lief that a life of ser­vice en­riches one’s soul and pro­motes so­ci­ety’s evol­u­tion.  “Yes, I am a busi­ness own­er, but nobody here is in this for him­self or her­self,” Kallas offered in a recent interview.  “We’re here to give and to en­cour­age the philo­sophy that we’re all in this life to­geth­er, re­gard­less of sexu­al ori­ent­a­tion, and that we need people in our corner no mat­ter our so­cial stand­ing.”  We are humbled to have Christina as a part of the South Street community and honored to present her with the very first Bud Plumer Community Service Award.